Because the NAMAE cafeteria that I was looking for was closed,
Eat soft ice cream at a tea shop (this is quite delicious),
Eat sweets that you bought in advance,
I finished my lunch with such a nonsense.
If I had come by car, I would have been able to go further and eat lunch at a delicious restaurant.
However, this time it was only by bus.
In addition, the departure time of the return express bus is quite early (14:45 departure from Aizuwakamatsu),
I left Isasumi Shrine after noon.
On the sign of the shop near the Yokomachi bus stop, a captivating letter “Takada Ume Pickle” was engraved.
Speaking of which, even the tea shop was selling Takada plum pickles.
I thought that if it was a specialty of Misato Town, it would be perfect as a souvenir, so I entered the store. 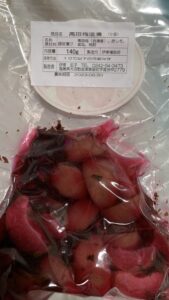 I bought salted plums, but there were other pickled plums.
The ingredients are simple and extremely delicious, so I should have bought more.
After that, I got on the bus and arrived in front of Wakamatsu Station.
There was a little margin until the bus time on the way back,
I visited Iwase bookstore next to the bus terminal in front of Aizuwakamatsu Station.

As soon as I enter the shop, the area near the entrance is an ordinary town bookstore,
Miscellaneous goods are handled in the back, and I thought that the choice of this miscellaneous item was very wonderful.
It is full of items that pushed Aizu and Fukushima to the forefront.
I probably can’t buy the soap printed by AKABEKO anywhere else.
When I thought about it and looked it up, I found an online shop called AKABEKO soap shop!
It seems that they are dealing with the same thing as the online shop there.
There are regular sizes and mini sizes, and I regret that I did not buy it fiercely because I should have bought it as a souvenir.
Speaking of which, that famous milk soap also has cows printed on the package.
Aizu’s AKABEKO soap is not on the package, but the red cow is printed on the soap body.
In addition to soap, mushroom-shaped diffusers,
There were a lot of miscellaneous goods with a mysterious natural taste that you could not see even in the loft.
I had something I wanted to see more, but the bus time was approaching.
I left Iwase bookstore with a feeling of being pulled back.
The bus to Niigata on the return trip was different from the outbound route, and the number of passengers was large.
Of course, it was not more than the capacity,
There must have been about 50 people on board.
You don’t need to make a reservation on the express bus.
I wonder if it is not just the Niigata ⇔ Aizu line.
It seems that we can be on a little over 70 people by the estimate,
What happens if we exceed capacity?
If there are people who say, “I couldn’t get on because the capacity was outstanding”,
Please let me know www
In the meantime, the bus arrived safely in Niigata.
It was a quick vacation.
I noticed this time that Aizu is smaller than Niigata,
The number of cram schools and bookstores is insanely large.
Is it the tradition of the Aizu clan to be eager to study?
Oh yes, I made this one as a souvenir. 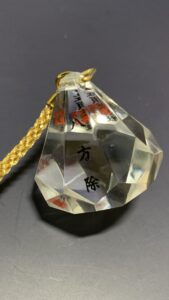 It is the eight-way removal of Isasumi Shrine.
¥2,000 in pairs.
If they can help rebuild the temple even a little,
It is a little expensive, but I purchased it.
It seems that there is a benefit if you hang this on your finger and walk in the precincts of Isasumi Shrine.
I found out when I got home www